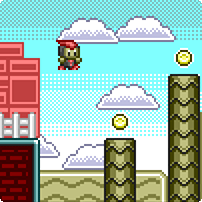 This week we have chosen Range Man by The Village Blacksmith as our Pixel Love game choice!

We have featured The Village Blacksmith's work before with Recursion, another great game.

The art style in this one has a similar look and feel. Use enemy for some extra air in your jump and to get to hard to reach platforms/areas. Avoid the spikes. This is a clean uninterrupted take on the classic platform genre. A really refreshing fun to play little title.

Have fun everyone, we'll bring you another Pixel Love choice next week! 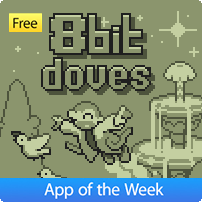 Apple have picked our game 8bit Doves as their Free App of the Week! So in case that wasn't obvious enough people with iOS devices that have not been so kind as to download it already can for the next week do so for gratis!

Go now our freeloading fans and grasp some Gameboy(ehem Nitromeboy) greatness while you still can! 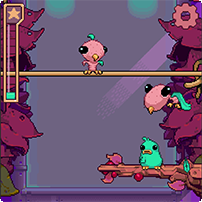 Back at the end of 2014 we had an idea for a small game that we were calling 'Feeding Time', so we started to develop the engine and draw the characters... now we're mid-March it's all changed many, many, MANY times!

Now the game is nearing completion we thought we'd share with you a little nibble of what you can expect.

The game will now be called 'Cooped Up'

We think the development journey whilst has been far longer than we expected, is actually quite interesting and we will share with you different sides to the design adventure as we near the release.

You are the new bird in a caged environment, all the other inhabitants have gone a bit loopy, they've just been cooped up too long! You must survive by twanging between the perches and maybe snack on a few bugs along the way! 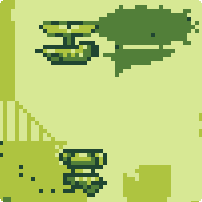 If you are a long time player of our pixel love choices, you probably know by now that we absolutely love Game Boy styled graphics and the colour palette. This game really stood out to us with it's great pixel art and style.

Have fun Nitromians, we'll bring you another gem next week!

Go SUPERSIZE! With Silly Sausage our latest game coming to a device near you. 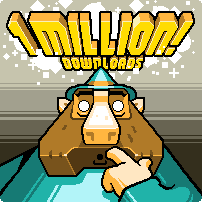 We're thrilled to announce that within it's first week Magic Touch had over 1 million downloads on iOS (1.1 million to be more accurate)!

That makes it already our most downloaded free game on mobile so far and we are super happy it has gone down as well as it has.

Because it has done so well we have already started work on an update for the game that will add more content so you can look forward to more about that when we have somthing to show :) 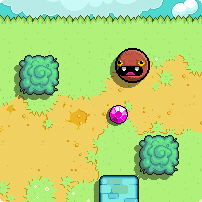 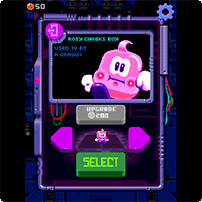 We recently heard that some of you were experiencing issues wherein older versions of Platform Panic was displaying on the game page. We have fixed this and now the character upgrades are back!

Apologies for this, some old files must have copied over during the accounts upgrade. I am still working towards fixing the game comments. The issue is much more complex than I first thought. The comments are still there though. It seems that it is a memory allocation issue.

Thanks for your patience. Seeing as this is turning into a little bit of a site maintenance post, how about letting me know of any other issues you may be experiencing? I will list them and work to sorting them out.

Thanks again for your continued help! 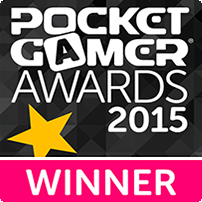 Were thrilled to say that we have once again won some categories at the Annual Pocket Gamer Awards! Platform Panic won ‘Best Action/Arcade Game’ and Nitrome won ‘Best Developer’.

A massive thank you to everyone who voted and congratulations to the other winners! We are thrilled to be among such great games! 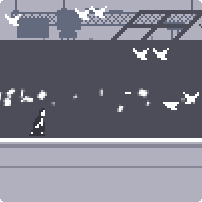 We have been fans of this one for a long time. The premise is simple enough. Keep running, don't fall! The graphics are great and the game uses his awesome Flixel engine.

There are so many hazards to keep yourself aware of in this one.

It has been a while and whilst rusty, we have managed to escape to 1555m!

How far can you get? 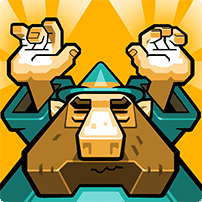 We have had some fantastic reviews of Magic Touch: Wizard for Hire so we thought we would do a little round up of some of them before the weekend.

"Magic Touch is a brilliant, sharply addictive arcade blast that makes brilliant use of your phone or tablet's touchscreen." Pocket Gamer 9/10 (Gold Award)

Magic Touch - Wizard for Hire [Free] is perhaps their best effort at being casual yet gamer-friendly. It's got touch-friendly controls, but very quickly ramps up into an incredible challenge to face down. Touch Arcade 4/5

Magic Touch: Wizard for Hire delivers excellent crafted touch based enjoyment that is a must have. Applenapps 4.5/5

We hope that you have been enjoying our latest game, have a great weekend everyone! 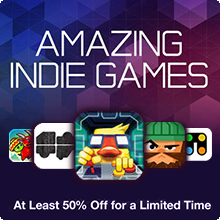 Apple have just started a really cool sale called Amazing Indie Games! I am thrilled to say that our game Gunbrick is featured in the sale and you can currently pick it up for a heavy discount!

All the games in the sale are at least 50% off for a limited time!

We're thrilled to see that one of our favourite celebrity Youtubers, Lonnie, has done one of his funny features on our new game Magic Touch: Wizard for Hire.

For people who liked this, you may also be interested to know that he also did a video for Endless Doves and Roller Polar which you can check out with these links:

If you didn't already see from the various marketing assets that popped up round the site yesterday our latest ‘FREE’ mobile game ‘Magic Touch: Wizard for Hire’ has now landed on your local app store!

It is available on Apples App Store, the Google Play Store and Amazons App Store. If you have a mobile device and have read this far without rushing to download it then what are you waiting for? If your waiting for the browser version to hit then I’m afraid your out of luck this time as we built Magic Touch in a language that is not easy to port to the browser so that’s not going to happen. The good news is that we don’t intend to make a habit of this and our next game will be heading your way shortly. Also we may have a special secret something lined up for you browser only folk that should make up for it a bit... shhhh you didn't hear that. 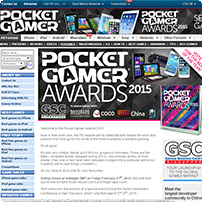 Firstly, thanks to everyone that has voted for our mobile games in this year's PGAwards!

The voting will close on Friday, so if you haven't voted yet, you still have a chance!

Just as a re-cap, here are the categories which we have been nominated for!

Thanks again everyone, we really appreciate all the votes we get!