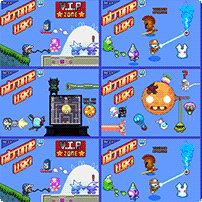 One thing Mutiny doesn't have is multiple multiplayer modes. While the regular Mutiny multiplayer is a simple team deathmatch mode, Mutiny could work with other game modes. In Mutiny's current multiplayer a dead player is kicked out of the game, though if Mutiny were to have other multiplayer modes I think some would have a function called "respawning", which is when a dead character is entered back into the game.

Here are a few of my ideas for multiplayer modes:

Starting a game would require that you go online via a button on the Mutiny main menu, then go to a list of multiplayer modes. Clicking a mode would bring up a list of other people searching in that mode for a second player, clicking a player sending a notification to them that you want to start a game. Upon them accepting, both of you would be able to suggest three multiplayer maps (from a list of maps) to play on, and once all are selected one would be randomly chosen and the game would start. Mutiny multiplayer matches would function just like the current Mutiny multiplayer.

Since you are can instantly play with anyone, what about allowing more than two people to play? Well, each extra person means an extra opposing team, which also means having to wait longer before it becomes your turn, and that could make the game last a pretty long time. Plus, because one team will always stay immobile for more than two turns, during these two turns other opposing teams could attack only members of that team, putting that team at a disadvantage.

Of course, these problems don’t have to surface. Although it is debatable, I think Mutiny should keep its online multiplayer two player only, as this keeps the game quick and stays true to the original game.

Something else that could be added is experience points progression, which is commonly seen in other online multiplayer games. How this works is that you take part in multiplayer matches (kills, assists, whatever the aim of the match is) in order to get experience points (shortened to just exp), and upon accumulating a certain amount you advance to a higher level, such as being level 1 and advancing to level 2. There are many levels that you can attain, and for each higher level the amount of exp needed goes up.

The game could also have achievements that grant exp, such as an achievement for getting ten kills with an Anchor or one for five times using an explosive weapon to throw an enemy more than half way across the stage. Achievement progress would be accumulated throughout all your played Mutiny matches, so you wouldn't have to get exactly ten Anchor kills in one match to get the ten kills Anchor achievement.

While achievements apply to all multiplayer matches, exp would also be gained during matches for doing certain things, such as regular actions like killing an opponent or completing a match's objective, or irregular actions such as killing a far away enemy. For those who don't like it, exp progression could be turned off.

Leveling up isn't just to show how good you are, other games allow you to unlock various types of helpful objects (like weapons and perks) to use in multiplayer. While this works for non-turn based games, it doesn't work for Mutiny because with the right weapons (which you would unlock if this were a feature) you can easily beat the opposing team.

Although gaining levels wouldn’t give you game changing stuff, there's something else that it could do - aid in aesthetic customization. Leveling up would allow you to unlock skins for weapons, your playable character, stages, certain weapon effects, and different sound effects. Skins could be content created exclusively for Mutiny, or be cameo content from other Nitrome games.

Stage skins would change all art on a stage, including the background and removing/changing the water. The effect of a stage skin would only apply to the person using it, however, there is the possibility of allowing a stage skin to apply to both the user and the opposing player.

This would be handled during the map selection process by a player pressing a button that would notify the other player if they would like to enable a stage skin. Upon the other player accepting, both players could select one of their own unlocked skins, which would then be randomly selected by the game when it selected a stage out of the suggested stages.

Finally, if you have a Nitrome account it could display your account module (that you see at the top right of every Nitrome.com page) as a sort of player card, which would also (in-game) display your level. This module would be seen by players if you're on the list of players searching in a game mode for a second player, and also when selecting a map.

These are just some of my ideas for how a Mutiny online multiplayer could function.

Hope you enjoyed reading! Feel free to suggest your ideas in the comments!

by Nobody (Nitrome Wiki)