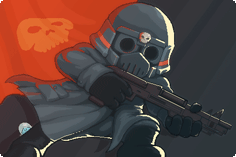 We mentioned that the Touchy app will be updated very soon and wanted to give you a little more detail in what the update means.

We've been experimenting a lot and trying to improve the controller experience. One of the most difficult things to do well is have the d-pad controller scheme feel natural on a touch screen. We wanted to create a d-pad where you don’t have to look at the device to position your thumbs after missing the flipping thing… and we think we've cracked it!

We recognise that people use different size screens and have different size hands, so how do you cater for these variables? By having a d-pad that can move with your touch and simultaneously predict which direction you are trying to press. This theory as far as we can see has not been done before on any touch screen device. We feel it’s the best d-pad implementation on a touch screen, we hope you feel the same way.

We also wanted to give you another skin from one of the new Touchy games, this is from Test Subject Complete. We hope you like it!

Next week we have got a ton of Icebreaker news, including an insight into just what we have been working on since its release at the end of June.

Until then have a great weekend. :)