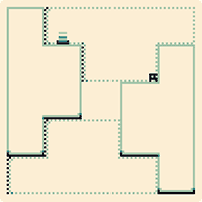 We have just released a brand new Pixelove called Through by Goshki (Originally made for the #gbjam4 competition). What may appear at first to be a simple platformer soon becomes something entirely different (after the first few tutorial levels that is!). Levels are literally flipped around on there heads as you discover you can 'push' through walls, thus allowing you to traverse unexplored platforms.

The graphics on this one may be simple, but we are a sucker for a interesting mechanic making this a worthy addition to our Pixelove series.

Apologies for missing the usual pixelove Mondays guys and gals. It was a Bank holiday (public holiday) here in the UK yesterday.

Some of you may be aware that we are still without a web developer at the moment, which increases everyone's workload a fair bit (*sob*). Well we are still looking and are hopeful that we will find the right candidate for the role given time.

Until then please bear with us on the lack of website updates. We are aware that some of you are a little bit fruistrated with the lack of web releases but we are really trying our very best.

We are however as busy as ever (currently working on 4 games and a game update!) and are dying to show you what we've been working on. Keep your eyes peeled for our upcoming game Beneith the lighthouse aswell as a slight (well quite big) change of plan for one of our other releases.

Until then, happy gaming. =)